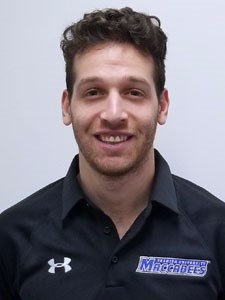 J.J. Davidson was promoted to the head coach of the Yeshiva University men’s soccer team in July of 2018. He spent the previous season as the assistant coach of the men’s and women’s soccer programs.

Davidson had a successful first season with the Yeshiva University men’s soccer program, in 2018. Under his leadership, the Maccabees made history by tying a program-record for most Skyline wins in a season. One of those victories, included a come from behind win to earn the Maccabees their first ever win over the Golden Eagles of St. Joseph’s Long Island, by a score of 3-2.

Out of all the head coaches in program history, Davidson has the highest Skyline Conference winning percentage. Davidson’s teams are not only successful on the field, but excel in the classroom too. In the fall of 2019, six student-athletes finished the semester with a 4.0 grade point average and the team earned the United Soccer Coaches Team Academic Award for the fourth time in program history.

Under Davidson’s tutorage, freshman forward Jonah Beberman was named the Skyline Rookie of the Year, as well as a member of the All-Skyline first team. Senior midfielder Dan Cohen earned a spot on the Skyline All-Conference second team. Beberman and Cohen were named Jewish Sports Review All-Americans, while Alberto Benhamu was acknowledged as an honorable mention.

Davidson also serves as a youth soccer coach for the New York Red Bulls, where he coaches in the organization’s youth training programs.

Thanks to his strong soccer background, Davidson was selected to serve as the head coach of the Maccabi USA Open Men’s Soccer Team for the 14th Pan American Maccabi Games, which took place in the summer of 2019. That same year, he completed his USSF “C” License.

Davidson was the head coach of the USA Under-16 junior boys team in the 2018 International Maccabi Youth Soccer Games.

Prior to joining Yeshiva, Davidson coached at the Rae Kushner Yeshiva High School and was proud to lead his program to its first championship in school history.

Davidson earned his Master of Arts in Psychological Studies with a concentration in Sports and Exercise Psychology, from Seton Hall University in 2020.

Starting in 2005, Josh was the Athletic Program Manager for Youth & Coach Development at the Jewish Community Center of San Francisco, serving over 1,500 children annually through teams, classes, camps, and select-level sports. He also served as Delegation Head for Team San Francisco at the JCC Maccabi Games®. As co-creator of the JCCSF Fellowship in Sports Leadership, Josh helped develop and lead the teen program that taught leadership through the lens of coaching youth sports. In 2013, Josh founded Maccabi Sports Camp, the first Jewish overnight sports camp on the West Coast.

All Posts
All Blog Posts